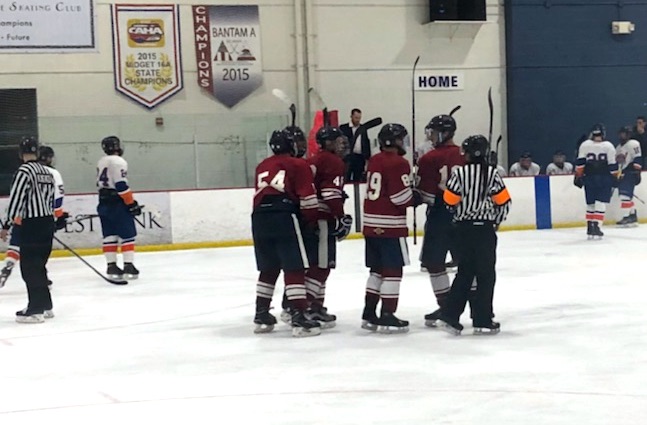 The Lions play again left something to be desired, but the team pulled out a 7-5 win in a late game on Saturday night over WCHC rival, CSU Fullerton.  Fullerton would score first on a laser of a shot midway through the first.  The Lions would tie the game on an Austin Billings goal, his 2nd of the weekend.  The sluggish first period would end in a 1-1 tie.  The Lions came out firing in the second, getting up 4-1 with goals from Hirai, Johnson and Hertz.  CSUF would score on a sloppy defensive turnover, to bring the score to 4-2.  The Lions pulled away again with a gritty net front goal from Jacob Benson.  The late stages of the 2nd would see some costly defensive turnovers, and CSUF netted two more to trail 5-4 after 2.  In the third the Lions scored early again, a beautiful tick tack toe play from Billings to Hirai who found Shibata wide open on the back post, the Lions led 6-4.  They’d extend the lead to 7-4 with Billings 2nd goal of the night and the lead would be safe, as CSUF scored one final time on a power play goal.  Sophomore Mike Zanini was strong in the LMU net, protecting the lead throughout the game.  The Lions improved to 4-0 on the season, and 3-0 in WCHC conference play.