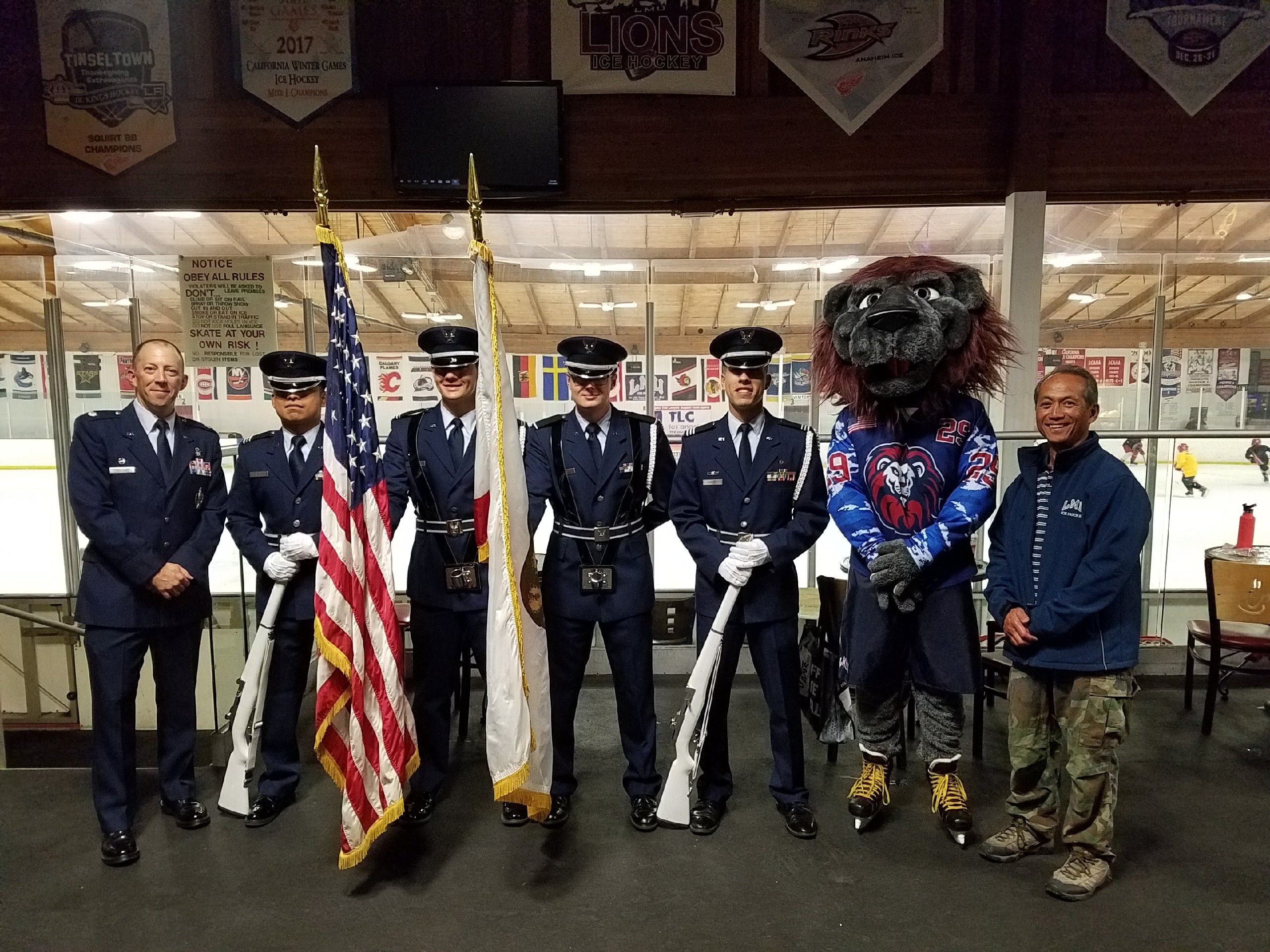 The Lions celebrated more than Veterans Day on Saturday night, after beating the 7th Ranked SDSU Aztecs at home in a shootout.  The Lions honored Veterans day by inviting out the LMU AFROTC, Detachment 040, including having the Color Guard present the colors.  Their Commanding Officer, Lt Col William “Ash” Holland dropped the Ceremonial First Puck, and the players wore special Veterans Day Jerseys, which were auctioned off during the game.

The Aztecs would score first, with Bolls notching his first of many on the night, halfway through the first.  The Lions, as they would again and again, answered right back, 30 seconds later.  Geeza found a rebound on a scrum in front, and tied the game.  With 3 minutes left in the first, SDSU would score on a fluke goal and take a 2-1 lead.  But again, the Lions answered right back, 17 seconds later, as Boente scored on a rebound from Tsokolas.

The 2nd was all Lions, as Tsokolas would score 4 minutes into the second, giving everyone on that line a goal and 2 assists.  The freshman Justin Hertz would score a minute later on a nice hold play, as he let the SDSU goalie slide out of position.  SDSU took a major boarding penalty, and Tsokolas was knocked out of the game for an injury.  LMU was not able to score on the major power play, and after 2, the Lions lead SDSU 4-2.

In the third, SDSU battled hard.  They’d score 8 minutes into the period on a scrum in front.  The same story for LMU, as the team scored again, 50 seconds later to regain the two goal lead.  Another freshman, Eric Johnson, battled hard in front and put home the rebound on the Hertz shot.  The game was back and forth after that, but SDSU scored with 2 minutes to play, and then with their goalie pulled to tie the game at 5-5.  LMU’s Greg Bennett leveled a heavy hit in the waning seconds, and was kicked out of the game and given a 5 minute major.

In OT, the Lions were on the PK for over 4 minutes of the 5 minute OT, but did a great job slowing the SDSU attack.  The Lions didn’t generate any shots in OT, but kept SDSU to only 2 shots on the PP, and the game went to a shootout.

In the shootout, LMU’s Matt Boente went first, and deked blocker side to score.  SDSU would miss wide on their first shot.  In the second round, Geeza was stopped, and SDSU’s Plante scored five-hole, to tie the shootout at 1-1 after 2 rounds.  In the third round, Hertz made a beautiful backhand shot, and Miller was stopped by Zanini for the Lions.  In the fourth round, Eric Johnson deked blocker again, and put the Lions up 3-1.  Zanini stopped Norris, and the Lions won the shootout 3-1 and the game 6-5.

Zanini played strong in net for LMU, stopping 19 pucks en route to his fifth win on the rookie season.